10 Warning Signs You Have Dementia 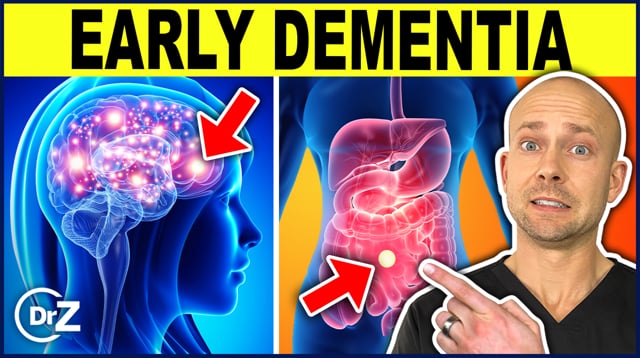 The Real Reason Your Immune System Weakens As You Age

10 Warning Signs You Have Dementia is a video highlighting the early warning signs of dementia. Many people start to develop the signs and symptoms of Alzheimer’s at a young age. By watching for the signs and symptoms you can easily hedge against these health concerns. Early warning signs of Alzheimer’s should not be ignored and should be addressed. We also discuss in this video the difference between dementia vs Alzheimer’s

Watch Next –> 10 Warning Signs That Your Liver is Full of Toxins: https://drz.tv/10-warning-signs-that-your-liver-is-full-of-toxins/

10 Warning Signs That You Have a Magnesium Deficiency: https://youtu.be/ME0ur0s3q8s

7 Warning Signs That You Have a B12 Deficiency: https://youtu.be/bhRJ7ajDVgU

10 Warning Signs You Have Dementia

Dementia and Alzheimer’s are often used interchangeably and that’s okay because they have many symptoms that overlap.

When you look at Alzheimer’s, it’s considered an actual disease. Whereas dementia is more of a category of symptoms. As we look at Alzheimer’s. You can develop it as early as 30 years of age, it’s referred to as young onset Alzheimer’s. This is something I think we should acknowledge, because when we look at any diseases out there, they’re typically occurring in the body many years ever before being diagnosed.

You could take cancer, for instance, it’s estimated that it can start showing up in the body 15 years prior to ever getting diagnosed. Let’s take type two diabetes, for example, a disease that most people understand you’re going to have insulin surging in the body. You’re going to have blood sugar instability, and this will go on for sometimes years prior to ever getting a type two diabetes diagnosis.

It’s estimated that on average people develop Alzheimer’s around the age of 65 to 74. And as far as dementia, it’s much older, around 84 years of age,

Over the next 20 years dementia is estimated to double. That means by the year 2040, over 40 million people will suffer from dementia. I think it’s so important for you to watch for the early warning signs of Alzheimer’s and dementia in your everyday life.

So let’s dive into the early warning signs. And symptoms of dementia. But before I do, I want to mention that you may be experiencing some of these signs and symptoms, and this is not at all what you have. It’s very common for people who are going through excessive amounts of stress and also lack sleep at night to develop Alzheimer’s or dementia-like symptoms.

4) Difficulty concentrating. If you’re somebody who just can’t sit down and concentrate on a task and you know, your brain’s all over the place, this also could be assigned to look for.

5) Mood changes is another big one. You know, somebody is just getting angry all the time. A lot of times when you see somebody who is suffering from Alzheimer’s or dementia, you notice that they just kind of lash out on people. They have very angry mood patterns.

6) Being confused about time or places. So let’s say. Failing sense of direction. You’re somebody who’s maybe traveled around most of your life, but all of a sudden you’re getting confused on, you know, how to go to a certain place you’re very familiar with.

7) Emotionally flat, Somebody just loses their personality. You know, they used to be a funny individual, they’re not funny anymore. Somebody who just has a very monotone mood, but they also are somebody who just wants to be left alone. They like to just sequester themselves away from everybody else and they lose their happiness. They lose their personality. So they’re emotionally flat.

8) Repetition in tasks or words. This would be somebody who maybe, you know, gets themselves dressed in the morning and then they find themselves going to do their makeup or fix their hair for a second time. Or they tell the same story over and over again.

9) Trouble with your speech. What happens is you’ll hear someone who is struggling with Alzheimer’s and dementia. They will string a sentence together that sometimes won’t be coherent. It’s something that’s just totally unintelligible. We have to make sure that, if you notice when you are speaking that maybe you’re struggling to come up with words, maybe you’re struggling to string a sentence along and speak clearly. Those are all things that you could look out for.

Remember that if you’re somebody who’s getting early onset Alzheimer’s, you may just struggle with this stuff at a very low level. You want to start paying attention, even at a younger age.

10) Changes in your gut function. So many people who are developing some of these issues with Alzheimer’s and dementia, they start to have constipation issues just because of the neurological connection between and gut. There’s a lot of neurological tissue within the gut. So therefore many times when you have brain issues, you have gut issues and vice versa.

The early warning signs of dementia and Alzheimer’s should be taken seriously, because as I mentioned before, if we look at cancer and diabetes, these things start many years in advance. So when you notice that you’re starting to struggle, make sure that you’re looking at getting the proper support.

So the big question is what do you do?

Well, I will first say that I’m very disappointed in how the traditional medical community helps people with this because whenever you go to them and you start seeing these different struggles and you get diagnosed with dementia or Alzheimer’s, it’s blamed on bad luck or bad genes. When in reality it’s bad advice from your doctor who is supposedly taking care of you for all these years. They ignored the warning signs and now you have a real problem.

So let’s talk about how to not only prevent it, but also overcome these issues, especially if you’re in some of the early stages.

Let’s go ahead and dive right into lifestyle first.

The first thing that you have to do is you really want to make sure that you stop the sugar. The average person is consuming 130 pounds of sugar every single year. I mean, just think about that, if you took five pound bags of sugar and you stack them up, you’d have this mountain of sugar that is. Each person is consuming on average. It’s insane. And when we look at Alzheimer’s or dementia, it’s referred to as type three diabetes. It’s because of too much sugar over a long period of time. And it becomes a chronic issue. It starts to deteriorate the brain. Stop the sugar. That’s a very important piece here.

Now, the next thing that we want to do is go low carb. The average person is consuming. 400 grams of carbohydrates per day. That’s an insane amount of carbohydrates, but the reality is that’s how most people are taught to eat. But it’s something that I had to really work hard to overcome because when you eat all those carbs and you have all that sugar every day, will you become addicted to it?

So if that’s you just start getting yourself moving in the right direction. So it’s important to stop the sugar, but also bring the carbohydrates down. I recommend that you focus on consuming around a hundred grams or less of carbohydrates per day.

Now, the next thing that we want to do is we want to focus on eating a whole food diet that is rich in good quality fats, like olive oil and coconut oil. These fats are very important for your brain. When you look at your brain, your brain is made up of roughly 80% fat. It’s a big ol’ blob of fat. You need these good, healthy fats to make sure that your brain is getting proper nutrition.

If you’re somebody who is struggling with some brain issues, it would be a really good idea to try the ketogenic diet. And if you have severe issues along the lines of a neurological problem like dementia or Alzheimer’s then you certainly want to think of going full time keto.

If you’re just having some symptoms that show up here and there, then you could go keto for like 30 days, come off of it and then do keto again for another couple of weeks, you can go in and out of ketosis and it would be highly beneficial and healing for your brain.

Next on our list is make sure that you’re exercising daily. You have to get that movement in your genetics that requires exercise. You don’t have to go to the gym and become the next Olympic athlete, but you do have to get some movement in every day, at minimum, a 30 minute brisk walk. When you exercise, you increase blood flow to your brain, you increase oxygenation and it’s very healthy for your brain.

Next is going to be increasing the amount of fermented food and fiber that you’re consuming regularly.  It’s very important to make sure that you’re giving your gut the proper foods that it needs in order to heal and also thrive. So fermented foods like sauerkraut and kimchi have good probiotics. If you can do this, try to eat fermented food every single day. You can use things like yogurt and all the different, good fermented vegetables.

When you’re starting to see some of these early warning signs of dementia and Alzheimer’s, I don’t particularly want to go towards medicine. And I didn’t think that anybody who watched this channel did either.

So what we want to do is use some high doses of some different herbs and vitamins that nature gives to us in order to help heal our bodies.

1) Ketones. You can take a scoop of exogenous ketones, and it really helps supercharge the brain. They’re very healing too. It doesn’t matter if you’re dealing with early signs of Alzheimer’s and dementia or any other neurological issue, they’re very good for you.

2) Probiotics. We already mentioned that there is a gut brain axis, and if your brain is suffering, your gut suffers and vice versa. So one of the ways that we can actually support our brain health is by taking probiotics. Use probiotics regularly in order to promote good gut health and essentially good brain health.

3)  B vitamins. Many of the different B vitamins are going to support your nervous system and also support brain health and prevention, and also help you fight stress, which can lead to some of these different signs and symptoms we were talking about. Look for a good B-complex that has everything in it that will really support neurological health.

4) High doses of DHA. One study found that when using high doses of DHA, it increased nonverbal reasoning. It led to better mental flexibility. And it also helped people with their memory and their vocabulary.

5) CoQ10. It helps with heart health and so many different aspects of your energy and wellbeing. Make sure you’re using the active form so that you can absorb it well.

5) MCTs. MCTs are really going to go straight to your brain, giving you good energy. And that’s healthy fat.

How To Detox The Brain Naturally | Reduce Brain Inflammation Instantly

15 Signs That Your Brain Is Toxic

Your Dental Health Is Deteriorating Your Brain? – Doctor Reacts