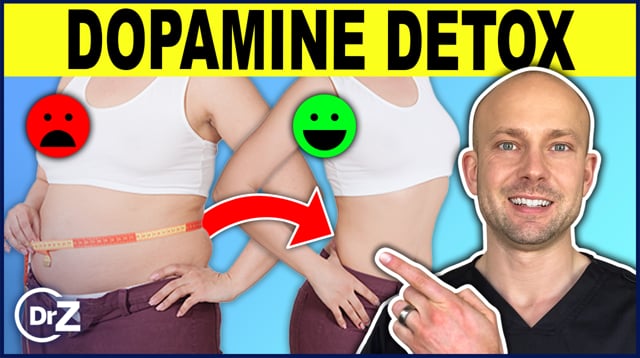 How To Lose Fat Naturally Without Exercise | Belly Fat Be Gone!

Top 10 Healthy Foods You MUST EAT For Weight Loss

How to Fix a Slow Metabolism | Lose Weight Now

Big Belly But Not Fat – QUICKLY Shrink Your Stomach

Fat Burning Foods | These Are A Must

8 Surprising Things That Happen When You Lose Weight

How To Burn Belly Fat

Lose Belly Fat Fast With A Dopamine Detox is a video that looks at an unconventional weight loss strategy that will help you take control of your fat loss. Though our diet is important for fat loss and exercise. What is really important is getting your mind right and tackling the mental aspect of weight loss. How to lose belly fat is more mental than it is anything. we have to make sure that we are putting solid effort into the mental strategy of weight loss as well as the physical.

When you try to lose belly fat physically, it’s easy, but emotionally it’s extremely difficult. I’m going to break down why this is such a challenge mentally and how you can kick start fat loss in your body today.

If you’re trying to lose weight, all you have to do is eat less, exercise more and make good food choices. Look, I just solved all the world’s obesity problems. The fact is, it’s not that simple because what comes between you and your goals with weight loss is a chemical in your brain that you’ve never heard of.

There’s a system in our body called the brain reward cascade. This is this process which rewards the brain when you take actions, which encourages survival. You could imagine primal instincts, like eating, would be one of them. You could imagine our ancestors, they’d be out foraging for berries and they’d find that berry they’d get that dopamine boost and they would eat it. The same thing would happen if they would go out and hunt antelope.

The brain knows that when you eat, you’re doing something good for your body. So what happens is it releases a feel-good chemical known as dopamine that gives you immense pleasure. And this is why your body’s hard wired to seek out behavior that releases dopamine, which stimulates that reward system, making you feel good.

With fast food on every corner, and a grocery store within close proximity to your home, this reward system can really lead you astray if you don’t have any discipline, because when you take actions, which repeatedly push those dopamine levels in your body, like following your primal instinct, to eat foods, that’s high calorie, high fat, high carb, high sugar. And you want to consume those foods because those are the ones that will hold you over, if you have to go a couple of days without a meal, if we think primal times.

Well, the thing is, is that that actually causes a downregulation in the dopamine receptors. And though this is very common today, it was very hard to come by in primal times.

As you start to consume more and more pleasure food, your dopamine levels go too high, but your brain knows what to do because it wants to create balance. And it does this by starting to remove some of the dopamine receptors. But this sets the stage for a new problem. The new problem is with fewer receptors, we have to hit an entirely new spike, an entirely new high of dopamine, in order to get that same pleasure response that we’re looking for. So all of a sudden you start craving more junk food, more sugar, and things you shouldn’t be eating.

Have you ever in your life had a time where you had just a little bit of sugar, a little bit of carbs, and you just knew that you shouldn’t eat it, but you’re going to have a little bit here, but soon that spirals out of control and you want more carbs, more sugar. And that leads to you increasing not only the quantity, but the frequency in which you eat these. And it seems like you can never get enough. Well, this is simply something called tolerance where you’re getting to that tolerance point with dopamine.

Now with far fewer dopamine receptors in the body, you’ll have much less dopamine activity. And as a result, you’ll get angry. You’ll get irritable. You will feel very moody when you don’t get what you want. This is what leads to withdrawal. Tolerance, which I mentioned before now, withdrawal are the two factors which lead to addictive behavior when it comes to eating. This dopamine release system, without a doubt will cause you to become a slave to getting that reward and that stimulus that your brain is looking for.

Getting this under control is how we can lose belly fat with a dopamine detox.

Now, I want to talk about addictions for a quick second. Addictions in general is something that has a very negative overtone to it. And this is because we think of the addictions that are really going to mess up your life, that our parents warned us about things like doing drugs. Or even drinking too much alcohol. But the reality is, all addictions can mess up our lives. When we look at the food addiction out there, it’s a real problem. 42% of Americans are obese. Obesity will cause heart disease, cancer, diabetes, and it’ll cause you to have an early death.

We have to realize that most of us to some extent do have addictions and it’s not something that’s horrible. We just have to identify that we have it, understand what’s happening in our brain, and then address it just like you’re learning how to do right now.

So let’s talk about a couple of potential symptoms of a food addiction.

1) Craving food though you’re full.
Let’s say that you ate a meal and you ate some protein and you ate some veggies, but then after you ate that food, you are still craving more food. And you’re like, what is it that I want? You’re craving something. Well, the reality is that you’re craving something that will give you that dopamine hit. And if you ate those carbohydrates or that big, high sugar deserve first, your cravings would have never even persisted. So if you’re craving though you’re full, there’s a good chance that you’re looking for that dopamine hit.

2) Eating until you’re excessively stuffed.
Okay. This is another thing where people are getting that brain reward system that is not hitting them, so therefore they’re just stuffing themselves with food.

3) Unable to quit, despite physical problems.
This speaks to a lot of people. Somebody who’s walking around with diabetes and high blood pressure and high cholesterol, and they know that these very foods that they’re eating are killing them, but they’re unable to quit. Their bodies are deteriorating. They still won’t stop.

5) Chronically eating more than intended.
You sit down and you’re like, oh, I’m just going to have this plate of food here. I want to keep my portions under control. And then by the time you get up, you ate like four plates of food. Well, look out for that.

6) Do you go out of your way, not eating food that’s readily accessible in your fridge in order to have something else?
This was actually asked on a Harvard questionnaire when they’re looking at food addictions. Basically, what they’re saying is if you’re at your house and you have a whole fridge full of food, but yet you run up to the local gas station with a whole bunch of snacks, or to the local fast food place, in order to actually get that food that is going to give you that big dopamine. If you walked away from that healthy food in your fridge to do that, then there’s a good chance you could have a food addiction.

At this point, we’ve realized that in order to lose belly fat, we have to look beyond the physical change. And we have to look at how and why our brain is getting hijacked, making it very different for us to act on this change. So one answer is that we have to break the pleasure seeking cycle that we’ve been accustomed to within our brain.

One of the ways that we can do this is by doing something hard, this will help balance our dopamine levels: fasting, either through intermittent fasting daily or doing a multiple day water fast.

You can also use specific amino acids and vitamins, and this will help boost your dopamine levels so that every time your dopamine levels plummet, you don’t get hijacked and then make poor choices. Some of these different nutrients include: L-tyrosine, chromium, L-glutamine and 5-HTP.

Beyond fasting and nutritional support, you really have to watch the foods that you’re eating. Carbohydrate rich, processed foods, and foods that are high in sugar are all going to be foods that are going to throw your dopamine system off. And it’s these particular foods that are responsible for the obesity epidemic, but also the same foods that are causing you to have poor health.

These simple changes will stop your cravings, improve your mood, and help you lose belly fat through a dopamine detox.

How To Tighten Loose Skin | This Really Works!

How To Burn Belly Fat