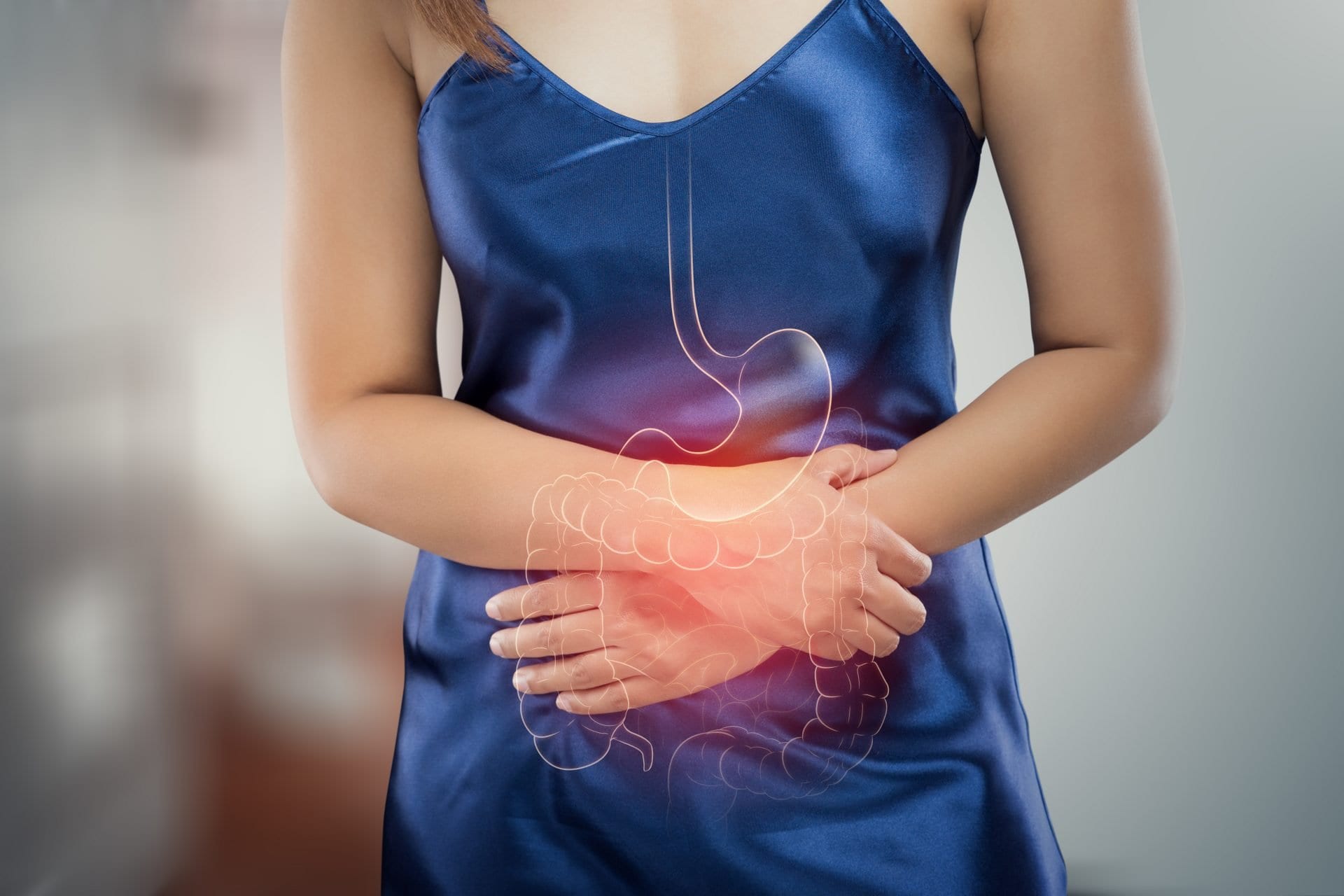 New research shows that SIBO (small intestinal bacterial overgrowth) is responsible for up to 84% of gut issues! (1) The majority of bacteria are supposed to be located in the colon. However, if too many bacteria grow in the small intestine, it can lead to many digestive symptoms and nutritional deficiencies. Now you are probably asking, how do you know if you have SIBO? Or you know and maybe wondering, how to reverse SIBO!

SIBO occurs when bacteria that normally grow in other parts of the gut start growing in the small intestine. This condition can be very serious. It has many symptoms such as pain and diarrhea. It is important to note that the body starts to use up its own nutrients. This can lead to malnutrition. In this article, we will discuss what SIBO is and what you can do about it. i.e. how to reverse SIBO. Let’s start by discussing what SIBO is and how it develops.

SIBO (small intestinal bacterial overgrowth) is a bacterial infection in the small intestines.(8) It is normal to have bacteria in the gut. However, there are many ways disruption can occur. If there is too much bacteria in the wrong place, this can cause many problems. SIBO most commonly occurs when bacteria, which is supposed to stay in the large intestines, makes its way to the small intestines. keep reading to learn how to reverse SIBO or use the below link to get access to our educational program.

The role of the small intestine is digesting food and absorbing nutrients. It is also an important part of the immune system. The normal bacteria also perform important functions. These beneficial microorganisms help protect against bad bacteria and yeast that are ingested. They help the body absorb nutrients. In addition, they produce several vitamins like folate and vitamin K. These bacteria help to maintain a normal small bowel. Now, to understand how to reverse SINO, let’s discuss the many symptoms of SIBO that occur. Keep in mind, you do not have to have all of these symptoms in order to have SIBO.

The early signs start with symptoms of fatigue and being bloated. Being nauseous is also common. You may experience diarrhea, and sometimes constipation as well. Unfortunately, many conditions can cause those symptoms, so you can’t know that it’s SIBO just based on how you feel. (1)

It is extremely important to know how to reverse SIBO. If you have SIBO that is untreated, your small intestine might start to not absorb nutrients. This could lead to weight loss or anemia. Then your body is not getting enough iron either. (2) This is not a good development for your body. Now we will discuss who is most at risk for SIBO.

Who is at Risk for SIBO?

There are some populations who are at high risk for SIBO. Some of these populations include the elderly, people with chronic diseases, and people who take certain medicines.(8)

SIBO is also associated with the following conditions:

If you have any of the above conditions, you should be tested for and understand how to reveres SIBO as well. The reason for this is because those conditions are often associated with SIBO as well. Now that we’ve discussed some populations who are at most risk for developing SIBO, let’s discuss how you can change your diet to help combat and reveres SIBO.

Diet and SIBO: How to Reverse SIBO

There are a few things that you can do to help SIBO by adjusting your diet and lifestyle.

If you follow the above advice, you will see fewer symptoms of SIBO. If you limit your carbohydrate intake, you can prevent bacteria from growing. Many also benefit from eating a diet that is low in fermentable foods (FODMAPs). FODMAPs are short-chain carbohydrates that are commonly present in dairy products, grains, and certain vegetables. (5)

Some of these include:

There is evidence that supports that probiotics could help balance out the bacteria in your gut. A study in 2010 found that probiotic treatment may actually be better than antibiotics at treating SIBO. (4) However, there are other studies that are inconclusive about that outcome as well. The smartest thing to do in this situation is to ask your primary care physician what would be the most beneficial for you.

We do not know how many people in our population have SIBO. This is because many people confuse it with other diseases. Therefore, we do not have accurate numbers.  Some studies suggest that between 6 to 15% of healthy people actually have SIBO. In addition, there are some studies that show that up to 80% of people have irritable bowel syndrome.(7)

SIBO is largely under-diagnosed. This is because many people don’t seek medical care for their SIBO symptoms. Many doctors aren’t aware of how common SIBO is now. In addition, the most commonly used tests do not give accurate results. Many give fairly high rates of false-negative results. False-negative is when the results say you don’t have a disease but you actually do have it. (8)

This is unfortunate because we don’t have very many ways to diagnose SIBO.  Breath tests diagnose SIBO by looking for the byproducts of digestion, especially those produced by bacteria. Upper GI endoscopy allows a gastroenterologist to look at the inside of the upper part of the small intestine. Then they take small bits of tissue that can be examined under the microscope. Biopsies can determine if there is damage to the lining of the intestine. Then they check to see if the damage is causing the symptoms through bacterial overgrowth or another way. SIBO can also be diagnosed by blood tests. These tests may be ordered to look for different causes of anemia, electrolyte imbalance, and vitamin deficiencies. While these tests are being performed, it is appropriate for the health care professional to look for conditions that are associated with SIBO. If such a condition is already known, then maximizing treatment of the associated condition may also be suggested at the same time. It is important to note that SIBO is treatable, but it can recur.

We have a few products that help with SIBO. The first item that we have is the SIBO kit. The SIBO kit contains several supplements that will help alleviate symptoms of SIBO. Those supplements are : 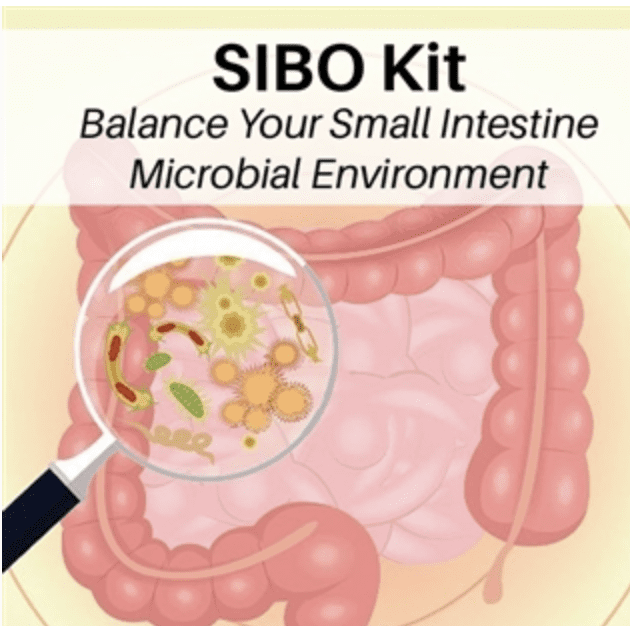 The GI Repair ingredients are l-glutamine, licorice, arabinogalactan, and aloe leaf extract. When healing the gastrointestinal tract, it takes more than enzymes and probiotics. Those are great to support the gastrointestinal system. However, it is very important to use the proper nutrients to balance bacteria, dampen inflammation, calm immune response, and strengthen gut mucosa.

Small intestine bacteria overgrowth is a problem with too much bacteria in the small intestines. Probiotic strength incorporates key strains of probiotics that help to balance the intestinal microbial environment. This probiotic specifically works well with SIBO as it does not contain prebiotics.  In addition, Probiotic Strength supports a healthy immune system function.

Microbe Cleanse contains extracts of bayberry bark and grapefruit seed. These complement the actions of berberine to support healthy microbial activity, stimulate circulation, and promote mucous membrane health. Zinc is included in this formula for its immune-supportive effects. In the case of bacterial overgrowth, it is not only important to put the right things in, but cleansing the bad bacteria out.

With small intestine bacteria overgrowth, it is very important to make sure you have a proper pH in the stomach and gastrointestinal tract. One of the major contributors of SIBO is an alkaline pH that allows for the improper function of the gastrointestinal system, thus leading to an overgrowth in bacteria. Gastro pH is used to create a more acidic environment that does not allow for bacterial overgrowth.

Small intestinal bacterial overgrowth is known for causing nutrient deficits as the excess bacteria consume the nutrients within your small intestines, especially fat-soluble vitamins like ADEK. Using Multi Min daily allows you to get a healthy dose of fat-soluble vitamins and other vital nutrients and minerals. Also included in this product is a complimentary Dr. Z Shaker Bottle, created by the Blender Bottle Company. This leak-free BPA and phthalate-free water bottle features a stainless steel mixing ball, making it the perfect container for making your GI Repair on the go.

In addition to the SIBO kit, we have a SIBO Educational Program available. This program includes: 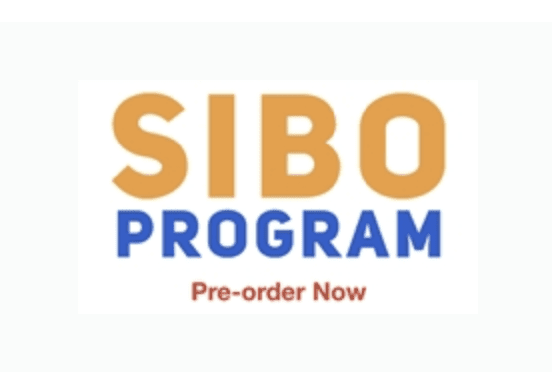 The SIBO Educational Program is intended to be used with the SIBO kit as well.

Now you have learned all about Small Intestinal Bacterial Overgrowth and how to reverse SIBO. If you have any of the symptoms, you should let your doctor know. SIBO can become very serious if left untreated. Please leave any questions or comments in the comments section below.

Vitamin B12 Deficiency Symptoms That You Must Know About

#1 Worst Cause of a B12 Deficiency